Wow! Guys, I’m really shocked. Look at this image, how clear it is! I am eager to move to etching. In order to etch it we need to stick all around this black frame with scotch properly to prevent metal from salt solution dropping. As if it drops on metal, it won’t look nice. Cut pieces of scotch. Frankly speaking I’ve got trembling hands,as I’m very glad that it has been done so well for now. Well, unstick it. 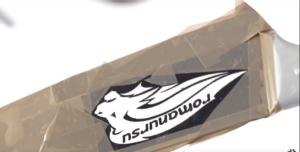 Then, we have to make a border with plasticine, something looking like a bath to pour the salt solution inside it, and prevent from water leak. 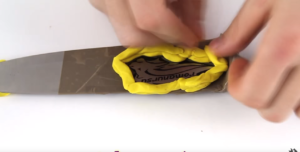 Pour the salt solution, and move to wires. Connect the plus from accumulator to the knife. This is plus.

The second crocodile clip we connect to the minus from accumulator. Just touch the water, and try not to stick the clip into the picture and do not scratch it. Just touch the water and hold it approximately for 30 seconds. Try not to hold it longer, as the quality will be getting lower because metal will be burned too much.

. As you may notice, the water started to get dark, that means that the reaction of etching has began. Well, guys, as you may see, the water became very dark, so we disconnect the wires, remove the rest of the water and plasticine with scotch. We removed plasticine, you may wipe it a bit with a cotton disk. Now we take acetone, apply a bit of it on a cotton disk and remove the rest of ink from printer properly. 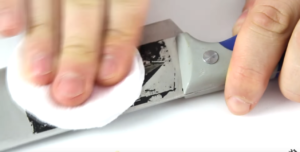 Don’t spare the acetone. It must be removed carefully. Well, guys, are you ready to look at what we’ve got? I think that you are saying “Yes!”. Well, let’s look! Drum roll! 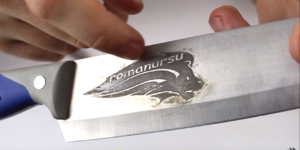 Well, I think that it is very cool as for the first time. The only mistake is that I told you to hold it for only 30 seconds, but I haven’t followed this rule, and overheld it more then on 1 minute. That’s why the contours aren’t as clear as we desired them to be. However, it is very well done in the middle, especially the letters are burned greatly. I think, there’s also the mistake in the fact that the scotch wasn’t stuck tightly, and the salt solution began to leak under it, and metal was burned around the contours. But I think, if you are going to follow the rule of 30 seconds, and stick it around tightly, you will get much more cool image than I did. Generally, I’m very glad. Someone who are not aware of metal etching may think that this is a sticker and it may be removed later. But no, look guys, here is scissors, I’m scratching it, honestly I’m pressing it very tightly. And look, this image is impossible to remove, it has been burned out in the metal. This is the same as making of logo here, but I think laser is used here. I don’t think it was made by means of metal etching. If you hold the solution on the image less than 30 seconds, it will be faded and not clear, however it will be much more clear than this one. As for me, in general, I’m very glad. Look at this, it’s very cool! Well, guys, I’ll upload the stencils to the community, so you may choose. If you liked this one, use it without any problems, tag me on photos, I’ll be very pleased to see what you have got. So that’s all for today, guys! I’m really very happy with what we have got. It’s very cool for me. I’m sorry that I’ve overheld it, otherwise, I could boast for 100%, but still that’s good! Well, guys, thanks for your attention! Here is what we got. Subscribe, leave comments, I’ll certainly read them. Bye-bye everyone!
Do you know?
The most expansive knife in the world with pictures, consisting of precious stones, costs 2,1 million dollars.