Hi guys! I guess you have already seen the video about how to print a photo or logo on your T-shirt with thermal transfer paper. However there were a lot of questions concerning that video, as not everyone could find thermal transfer paper in his/her town. That’s why I decided to make a simplified video, where I’ll show the way to make a print on the T-shirt at minimal expenses. 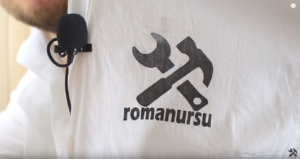 I decided to print a picture on the white coat, but not on the T-shirt together with you. I think it would look very cool. No matter of the clothes type, it’s important that its fabric consists of no less than 80% of cotton. Otherwise, if the fabric consists of more per cent of polyester or synthetics, the iron will melt the cloth while transferring the picture, and you’ll fail to print a logo. Then, we need a piece of self-adhesive wallpapers. We won’t need the wallpaper itself, we just need the paper they are stuck on. As this paper looks like glossy one, it will prevent from sinking of the laser printer ink. Also, we need a sheet of paper, iron and a laser printer.

Then, print a photo or a logo on laser printer, in mirror reflection, certainly. Then, cut the stencil with scissors carefully. We don’t need the paper any more. 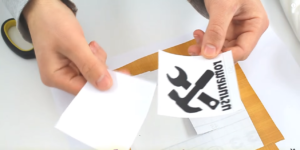 Now e just have to put picture on the white coat. Put the stencil and press it with the iron carefully. The main thing is that stencil must remain immovable during ironing.

Well guys, some 30-50 seconds have been passed. Let’s unstick the paper and see what we have got. Well, doctor’s overall of Roman is ready for usage. Here is our logo. It looks just perfect.

You may notice that it’s a bit faded, because I’ve made an experiment and washed it. I’d like to say that it has got through the wash, and did well. The image has faded just a bit. I don’t know how many washings it could be passed through, but I know that if you need a T-shirt or a white coat with your logo for some event, and there’s no possibility to order its printing, you may make it on your own in 10-15 minutes. That’s all for today. Like the video, if you liked this idea, leave comments. Don’t forget to write in comments, what you would prefer me to show you in the next video.

Bye-bye!
Do you know?
The law obliging the owners of color printing machines to register them at police had been existing for about 15 years in Russia.
According to the government of the Russian Federation from 1994 year, each person, who bought the color printing machine had been obliged to appoint the responsible person for that appliance.