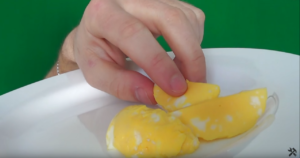 Hello my dear friends! In today’s video I’d like to try and show you how to make scrambled eggs inside their shell. The idea author is an American, not me, however I was interested in it when I saw this idea on Lizz TV. They tried to make an experiment and check whether it is fake or not.
In this video I’m going to show you an unusual idea of how to make scrambled eggs inside their shell. I saw this idea from on web, made by an American, but later Russian Youtubers cast this idea back, calling it a fake. They didn’t succeed, so they called it a fake. I partially agree with them, as unelastic sleeve has not enough speed to make a good centrifuge to scramble an egg. So I decided to change this experiment, and use women’s stocking instead of a sleeve. You may also use women’s nylon stockings. I’ve cut a piece of it. I think that I’ll manage to do it, because the stockings are elastic, and it will help to get more speed for a good centrifuge. I hope we’ll get the white of the egg mixed with the yolk. 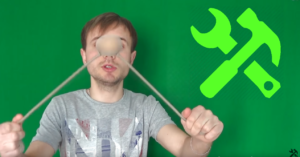 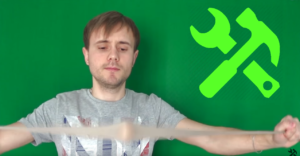 Sp, let’s start. Put an egg into a stocking, and try to rotate it. As you see,the stocking is very elastic, and I hope we’ll be able to reach enough speed to combine the white of the egg and the yolk. Rotate it about 20-30 times, then boil the egg. We are going to remove the shell and check whether it’s mixed up in one. There was a sound of popping in the egg, I think the yolk has popped. We’ve already span the egg. Let’s try to boil it for about 5 minutes, then pill the shell and look at the result. 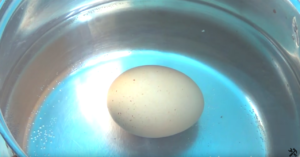 This is the crucial point, egg is boiled. Let’s try to remove the shell. 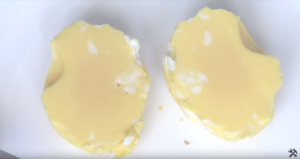 Well, my dear friends, I’m very glad. We did it very well. Of course, there are some white spots, but it’s because we didn’t spin it enough. I’ve already eaten one slice, it’s quite tasty, as a simple boiled egg. Also, I’d like to suggest you not to leave negative comments for American author of this idea, as it really works. It’s not a cheating, or fake. Kostia and Max could have span the egg not enough, or some problems might occurred while spinning the sleeve. I don’t want to argue with anyone. It does work. Thanks for your attention. By the way, you may scramble the egg inside its shell, paint it and serve on the Ester table. I think it’s an awesome idea. If your guests haven’t seen this video, they would be guessing for a long time where you took such an unusual egg from. Thanks for viewing this video. Bye-bye!