Hello guys! Sometimes I like to treat myself with sausage buns in the morning. Yes guys, I know, that it’s not so useful, it’s more useful to eat serials in the morning, but I can’t stand serials, especially in the morning. It seems like the organism doesn’t take this serial. As far as there were no cookery videos for a long time, today I decided to show you my recipe of sausage buns. Maybe someone has already seen this recipe, or cooked with it. So let’s start. First, I’m just going to show you what ingredients we need without specifying grams, as everyone will cook it to his liking. If someone likes a lot of cheese, accordingly he would graze more cheese. If you like lots of dough, you may eat almost all of it, and add a piece of sausage. So let’s start! First of all we need sesame, I’ve got a 100 gram pack, of course, it would be too much. Next, cheese, I took a 137 g piece of special Russian cheese. Sausages, I’d like to recommend you to choose children’s sausages, because I think that they contain less forbidden additives. I’ve got 478 g of sausages, approximately 7 items. Then comes the dough, it’s better to take puff-paste. Of course, you may make a dough by yourself. However if you don’t want to complicate the work, it’s better to buy a puff-paste, as it’s not so expansive. It’s better that the dough contains no yeast, because if it would, when you put the sausages into the oven, dough may raise too much, and you will it the dough itself. Then we need one egg and baking paper. 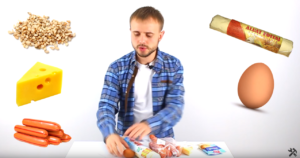 First of all, we need to pill the sausages and slice the cheese into small pieces. 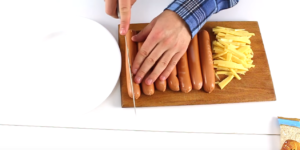 Then we have to make deep lengthwise cuts in the sausages and put the cheese inside. 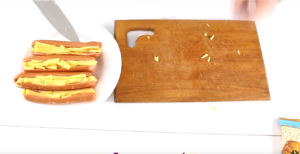 We move to the ready made puff-paste, we have to unfreeze it beforehand and then cut to long stripes. 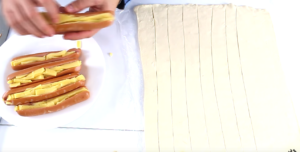 Now we wrap each sausage into the dough stripe with a little overlap. 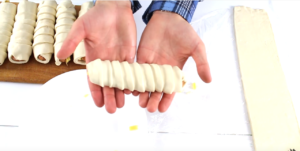 We have to get such beautiful ones. Now we lay baking paper and put them on the baking tray. Whip the egg with the fork and cover the dough with it on top and sideways. 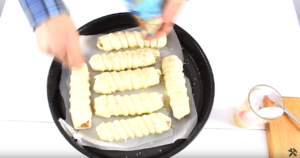 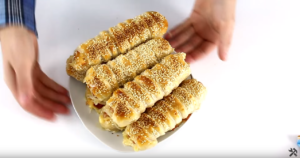 Let’s try them and estimate them to the taste. Guys, it really very tasty! I’m sure that you haven’t ever tried such a delicious sausage buns, except for those who coked it by themselves. I’m sure that there are no such tasty sausage buns, especially in the market, where they often are sold by some old ladies. Usually, they try to get more profit, spending less money on the product. They put the cheapest sausage, less dough and sesame, and of course, you won’t find any cheese in such sausages. Well, guys, if you don’t believe me, try it, cook it, and surely send photos to our communities Vkontakte, Odnoclassniki, and share them wherever you want, tag me there, and I’m sure to look at your reproductions, of course, I won’t have an opportunity to taste and estimate them. Thanks for watching this video, subscribe to my channel, press like, comment on the videos! Thanks a lot for watching this video. I’m going to eat all these sausages. Bye-bye everyone!
Do you know?
The longest sausage from Guinness Book of World Records had the length of 2022 meters. It was made by Serbian cooks in honor of yearly “Sausage feast”.