Hi again! A half an hour has been passed since I foamed the fish, and there are coals left. I’d like to tell a little idea of how to cook a tasty potato baked on the coals. I like to bake potato after barbecue or fish foaming. As you might know, small potato is being baked fast and it’s very tasty. While a big one fails to be baked inside properly. We need one potato and one egg, a toothpick and some spices to your liking. 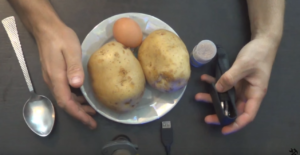 Let me show you the process of the preparing for you to see. Firstly, we need to cut a kind of a lid from the top. Remove the core with the spoon. 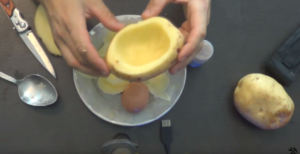 We have got such a cup, and then crack the egg inside the potato. 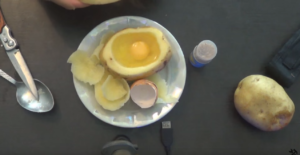 Take the lid and close it with toothpicks. 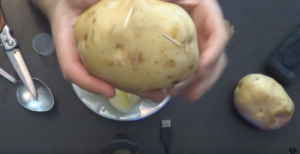 We have got such a potato. Put it onto the coals. 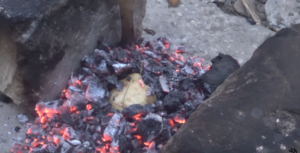 That’s ready. Let’s remove toothpicks and see what we have got.

That’s how it looks inside. Bon appetit! This is such a little idea. Perhaps, somebody will like it or not. As for me, it’s very nice. I’m going to taste it. I hope it’s so good as it looks. Thanks for your attention. Bye-bye.