Hello my dear friends! After my video about sausage buns, many people asked me to cook something tasty, interesting and simple. In today’s video I’d like to show you how to make placinta with cottage cheese or small patties. You will see the result in the end of the video and call it what you like. 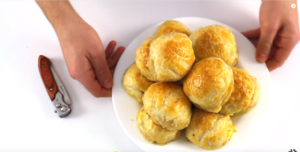 I’m very grateful for your photos with sausage buns you made where you tagged me, they were very nice, I hope that they were as much tasty. In order to make placintas with cottage we need puff paste without yeast, the same as we used for sausage buns. Also, we need about 4-5 medium tomatoes, 4 eggs, a piece of doctor or milk sausage, a brush, baking paper, cottage cheese, I took one for 18%, it’s perfect for backing. Then we need salt, a glass, dill and oven with the dripping-pan. 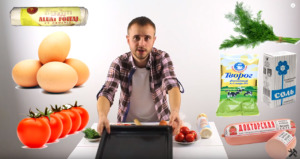 Firstly, let’s make a stuff for the patties. Put cottage cheese into the bowl. I’ve got half a kilo of the cottage cheese. Press it lightly with the fork and add eggs, we have to add 3 eggs. Then chop the dill. I think that will do. Salt a bit. And mix it intensively. 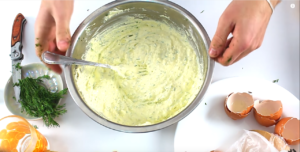 We move to the second and third parts of the stuff. Chop the tomatoes, then slice sausage, it’s better to make one more cut here, and then slice it. Stuff is ready. Let’s move to puff paste. 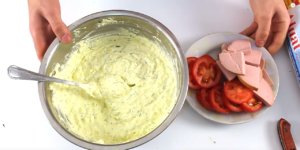 . First, cover the dripping-pan with the baking paper. Pour a few drops of an oil in order patties not to stick to the baking paper and spread it with the brush. Then cover the baking paper with one layer of the puff paste, spread it a bit, cut off the odds. Puff paste is covered with a cling film, so you may spread it with your hands, then remove a cling film and put tomatoes. Try to put them next to each other to decrease the wastes of the puff paste. Next we put sausage, and cover the sandwiches with the cottage cheese. As you may see there’s too much stuff left, so 200 g of the cottage cheese for 1 dripping-pan would be enough. 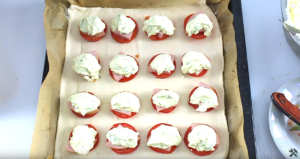 Then cover the sandwiches with the second layer of the puff paste, press it lightly and remove a cling film.
The most important moment has come. Take a glass and press through each sandwich. Remove the odds of the puff paste. 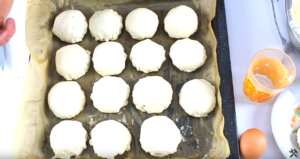 This is how it looks after we removed spare puff paste. You might noticed that one sandwich has gone. I haven’t seen where it has gone as I turned back and noticed that there’s one missing patty. I hope it will be found by the end of the video. I’ve bended the edges, as I put too thick pieces of tomato, sausage, and a lot of cottage cheese stuff. In conclusion, make the same procedure as we did with sausage buns – whip one egg, cover the buns with it using brush, and put into the oven heated till 220 degrees for 25-30 minutes. You may indicate the readiness of the buns by the golden brown. Look guys, we have got such beautiful buns.

Let’s cut one and look inside it. 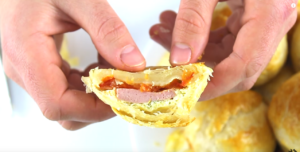 Cut it, as you may see there’s a cottage cheese on top, next there is a sausage, and a tomato at the bottom. Guys, that’s very tasty. Sausage buns weren’t as good as these placintas or patties. Really, there are many ingredients: sausage, tomato, cottage cheese, that’s why they are much more useful and substantial than a plain sausage bun. So this recipe is now at the first place and sausage buns go after it. So guys, try and experiment, tag me on photos, I’ll try to like them and write comments on your creations. Also, don’t forget to subscribe to my second channel and to the main one. Thank you very much for watching this video. Have a nice day! Bye-bye!

Do you know?
There’s no difference between white and brown eggs, neither in taste, nor in the substantial qualities and shell strength. Shell color depends on the color and breed of the chicken. White chicken usually lay white eggs, and colored chicken lay brown eggs.