Hello my dear friends! Roman is here with you as usual. Today I’d like to talk about fish fuming. 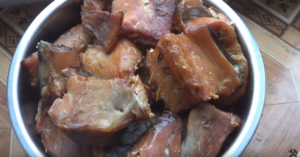 Recently, I saw a few recipes of fish fuming and making of smokery through the Web. There are complicated smokeries, and easy ones constructed with the make-shifts, which I’m going to show you today. The first try of fish smoking wasn’t successful as the temperature was to high, and fish had boiled instead of smoking. Second and third tries were done well. It was very tasty. My friends came to me after that and asked to fume fish for them. We need iodine-treated salt, rock-salt, fish, plastic packages. Don’t worry, there is no specific flavor or taste from iodine-treated salt, because we wash off the fish after salting. I’ve got scaled and cut to pieces fish, I was given it for fuming. It’s carp. You may smoke a whole fish, it doesn’t matter whether it’s sliced or whole. Put a glass of salt or more into the bowl, take a piece of fish, and cover it all over with salt. 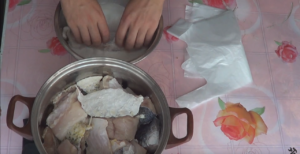 Don’t be afraid to salt it too much, as we are going to wash the fish afterwards. Also, fish consumes enough salt. When you salted one slice, you have to put it into a plastic package. We are going to put 5-10 pieces to one package. We have salted the fish, then shut plastic packages, and put it into refrigerator for about an hour and half. It will consume enough salt during this time. 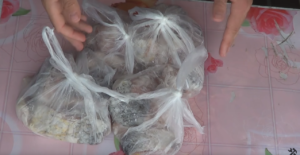 After we took fish from refrigerator, we have to wash off the salt. Then take a few kitchen towels and wipe each piece. It’s necessary to avoid wetness in fish. If there’s a lot of wetness, fish will be boiled, but not smoked. Then thread fish on the wire. Put it under the sun for about an our to dry. 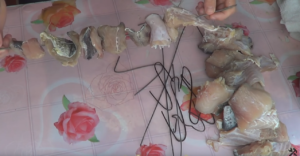 Let me show you the smokery itself. It is a simple barrel, I put there 3 bricks, and we are going to put wood shavings of any kind of trees. Then we’ll put a wash-basin or a tray in the center, it’s needed to avoid leak of fat on the shavings, and an outside smell of a fat for example. The barrel stands on two stones. 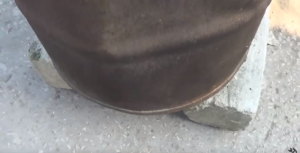 We set fire under it, barrel heats, and the shavings begin to smolder, so appears the smoke, and fish is going to fume. So let’s start. I’m going to show you everything without comments. 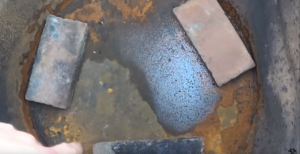 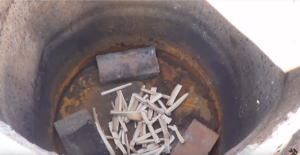 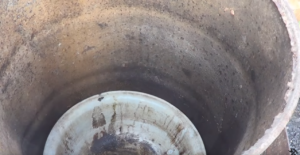 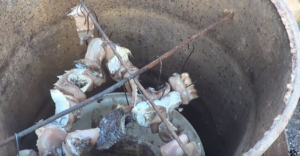 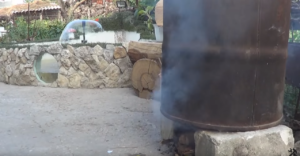 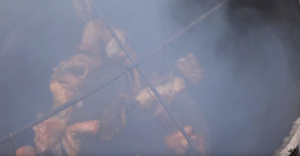 Well, the fish is ready.

We have been fuming it for about 4 hours on the apple wood shavings. Thanks for your attention. Bye-bye.