Hi everybody! We all know that periscope is one of the main attributes of submarine, as it allows to observe sea nature without coming up to surface. Periscope is also used by land forces. Periscope is used, for example, when it’s necessary to watch a certain surface out of the trench without risking and sticking one’s head out. Today I’d like to suggest you to make the simplest periscope. Frankly speaking, I don’t know which way you are going to use it at home, however I’m sure that this will bring your children much joy, if this periscope is made by a father and his son, or a mother and her daughter. So, let’s start. I’ll name the things we need. 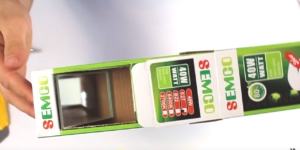 First, we need two carton boxes, I took boxes from energy save laps for 40 W. These boxes have ideally suitable size. In case you haven’t got such boxes, you can make them with carton on your own. We also need a stationary knife, two small mirrors and a glue pistol.

First, we have to stick together the boxes in such a way. 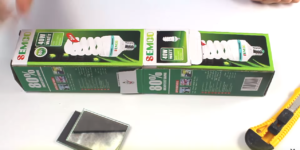 Then stick mirror to the box. Cut carton box with the stationary knife at the contour of three sides. Next, press the mirror in, open the box and fix with a hot-melt glue. 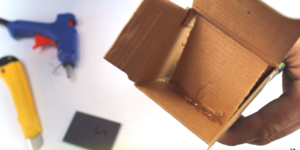 Do the same thing on the opposite side. It’s better to fix the mirror at 45 degrees angle, so you should try to reach this result. That’s all. Periscope is ready. Boxes size wasn’t given in the beginning as it depends on a mirror size. You may make a bigger or a smaller, a shorter or a longer periscope, it’s up to you. We are going to make an experiment. Put a toy on the table and look at it, allegedly, from a trench. 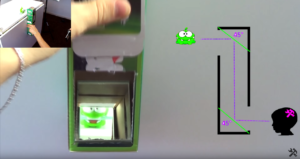 Do you know?
Periscope prototype was invented in 1430s by Johannes Gutenberg. Thanks to his device pilgrims could watch over the heads in the crowd at the Aachen festival.