Hello guys! You asked me to make a video about making a mould with gypsum for the mask we made before. And, surely, I’ll show you the result. 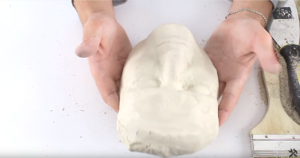 Traditionally, first I’ll tell you what we need, and then we’ll get to work. First we need a tap water, gypsum, or as it’s also called, alabaster, sand, two containers – one is for mixing gypsum with water, and the second one is for sand. Next, we need a paper scotch, a cream, the mask we made before, and a mixer. If you haven’t got a mixer, that’s not a trouble, you may replace it with fork or spoon, or even a plain wooden stick. We need a mixer to mix gypsum with water. It’s important to make it very quickly, as gypsum starts hardening very fast. Also, note that there shouldn’t be any nubbles. 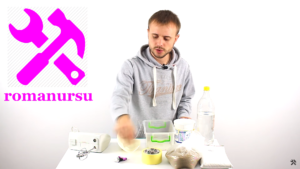 We may already pour gypsum, but I decided to secure myself, because if we pour gypsum now it may start loosing its shape as cream has softened it, and gypsum is heavy, which may lead to the shape loss again. So I decided to do the next thing — to cover the bottom of container with some sand, put the mask there, and again cover it with sand around. Sand will harden the mask, and it won’t hang down. 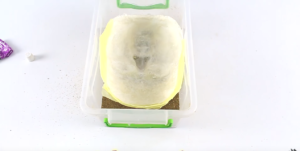 Let’s move to gypsum. Mix it closely with water and pour it into the shape. Now we just have to wait till it hardens properly. 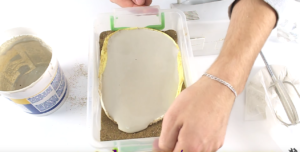 Well, approximately 15 minutes have passed, gypsum has already hardened. Let’s pull out the mask, and look at what we’ve got.

As you see, there’s a lot of sand, I’m going to take a brush and clean it all carefully.

Well guys, that’s how it looks after a little correction with pallet and brush. I am very glad of what I have done. Of course there are a lot of flaws, like such dimples or some bulged places of gypsum. All that is due to the fact that white glue makes wrinkles while it’s getting dry with paper towel. It leads to some dints or bulged places. In spite of that I’d note it once again that I like it very much, and it’s very cool as for the first try. Because there is a 99% similarity of the main features. I want to make a mask with this face mould. The mask would be made of a hot-melt glue. I hope you’ll like the idea. That’s all for today. Thanks a lot for your attention, and watching this video. Be sure to subscribe, leave comments and evaluate the video. Bye-bye everyone!