Hi guys! In today’s video I’d like to show you how to make a mini conditioner + air humidifier at home. 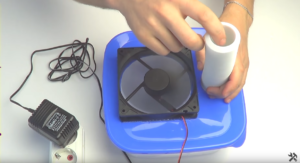 First, we need a siphon pipe, which you may buy from a construction shop, computer cooler and its power supply. I will use a power supply from a screwdriver for 15V, there’s a difference in 2V, so that the cooler would be safe. If you haven’t got a power supply, you can prolongate the wire of the cooler and connect it to the power supply. We also need a glue pistol, electrical tape, felt pen, stationary knife and such a hermetic container, which may be bought in any supermarket. 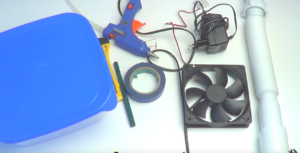 First, you need to put a cooler to the lid of the container, draw the line around the internal side with the marker, and cut out a small window with a stationary knife.

Then cut a siphon pipe at the both sides.

Then you have to put a siphon pipe on the lid, draw the line around it and cut out the circle with the knife.

Then stick cooler to the lid of the container in such a way that it suck air instead of blowing it out. After that we stick a siphon pipe. 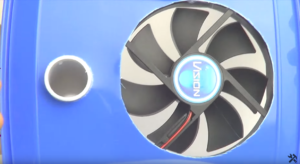 In conclusion, we connect cooler to the power supply. First, you should cut and wires. Red wire is a plus, so we insert it into jack. Black wire is a minus. Then isolate it with an electrical tape. 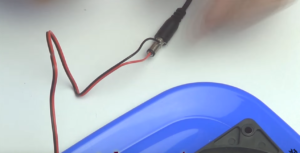 Air conditioner plus air humidifier is ready. Let me explain you how it works. For example, open the lid of the container, fill it with a simple tap water, and put it into freezer for a few hours to get such an ice brick. Put the ice brick back into the container, then close the lid to make it leakproof. Plug the power supply into the socket, and as you see, air began to suck the air in. The air is being cooling by the ice, and it has no way out except for a siphon pipe. We may control the air flow directing a siphon pipe.

Do you know?
The smallest and the biggest air conditioners were developed in USA. The first one was made for greenhouses airing. The second one was made for comfortable residence in wards of VIP prisoners.