Hey!Many people asked me lots of times to make some video about pyrotechnics and fireworks before a New Year. Not everyone knows that it’s forbidden to upload videos on YouTube, which may threaten, using some explosives. That’s why today I decided to show you a safe firework. Maybe somebody knows this means of making the firework, or somebody’s parents made such one in childhood. Let me show you what we need t make a firework with a pot. Meanwhile, the title is very attractive, I hope you’ll like the video very much. 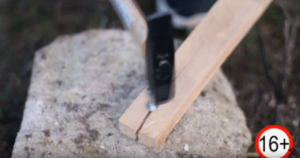 . First, we need a small hammer. You may use a stone instead of the hummer, then we need a wooden rail or stick. The matches, we will just remove sulfur from them, and a dowel. What do we have to do first? First we have to nail the dowel into the wooden rail. 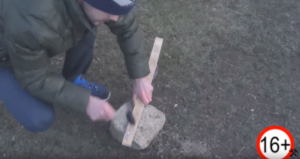 Nail it not too deep, for a dowel to be seen a bit from the rail, then nail in the white ashlar limestone making a small deepening. Pull it out, and we’ve got such a hole.

Then take matches, remove sulfur from them, and put it into the hole. I think that 5 matches would be enough.

Put one more match, tamp it down with the dowel, press it in. Then you just have to strike the dowel with the hammer slightly which will lead to a small explosion.

. As you might have heard the explosion was very silent. Now let’s nail the dowel in deeper, so that we’ll get the deeper hole, and we could put more sulfur in it. Pull it out. You may use a denser white ashlar limestone which not crumbles as I’ve got the one which is crumbling. This is the reason of not very good hole. Put sulfur into the hole, then insert the dowel and strike with the hammer. 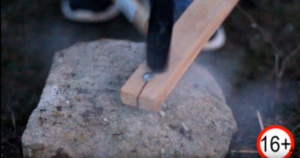 A-a-a! I’ve got that sound in my ears. Well guys, in such a way you may entertain a bit in the New Year’s Eve. You may take a brick or a white ashlar limestone, a few matches, go outdoors and make some fun. Thank you so much for your attention. I hope that this short video was interesting for you. Bye-bye!

Do you know?
Pyrotechnics specialists have made an estimation that if one takes all the fireworks fired in the New Year’s night in Moscow, and fire all the amount of the crackers, fireworks, fountains and so on, it might lead to an explosion equals to the power of a half ton air bomb burst.