Hi guys! Unfortunately, the half of summer have been passed, it’s sad to remember, but the August is coming and there’s nothing we can do. Though, August and September may bring us some joy as these months are known for tasty watermelons. 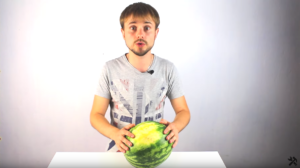 So in this video I’m going to show you how to choose watermelon correctly and what to pay attention to when buying it. First, you need to look over paying attention to fruit-stalk. It must be dry, it means that watermelon was picked being ripe. If fruit-stalk is green, it means it was picked until it’s pale. Sometimes those who grow watermelons pick them while they are green, before the rains start, as you may know watermelons start to creak when it rains. So they are gathered while they are green, then put under the sun, and watermelons begin to get ripe under the sun. That is an artificial way of growing. Also, pay attention to the skin of watermelon, it must be glossy, but not matte. If the skin is matte, it means that watermelon is soft, and salesman have been selling it for a week. If the skin is glossy, it means that watermelon was picked recently. While buying a watermelon, check it for cracks or small scars. As watermelons are under the sun during the whole day, it may turn sour and obtain a bad taste. Pay attention to the ground spot. Its one more sign of natural way of growing, without using greenhouse. Watermelons grown in greenhouses are urned often to get ripe faster. Watermelons grown in the garden or on the field are in the same state all the time up to the moment they get ripe. In conclusion, there are two more tips on choosing the most tasty and sweet watermelon. It must be ig, but not heavy, as heavy watermelons are watery and tasteless. It must produce a deaf sound when knocking on it. It means that watermelon is sugary and sweet. That’s all for today. I hope these tips will be useful for you and you could choose the most tasty watermelon you’ve ever eaten. See you in the next video.

Do you know?
In 1981 Japanese farmer grew a square watermelon for more compact storage.